A historical renovation, 200 years in the making

Why we love Poolesville, MD

Luxury homes are under construction at Brightwell Crossing

Inspiration and ideas for your bathroom remodel

How to prepare for home remodeling

Tips for choosing a kitchen countertop

A Basement Remodeling Project with Creativity and Craftsmanship

Megan and Greg were about to build a Kettler Forlines Home last year. Then, life happened. Megan’s mom passed away and her father suffered a stroke. Instead of starting from the ground up, they found a home that just came on the market in their desired Poolesville, MD, location. It needed renovations, but since the house was below their price point, the couple had the budget for remodeling. Megan and Greg returned to Kettler Forlines Homes to undertake a basement remodeling project with creativity and craftsmanship.

They loved the design, details, and construction of the Kettler Forlines Homes they looked at. Megan said the work passed Greg’s discerning eye. “Greg is that person who looks for cracks and flaws. He couldn’t find anything wrong with the Kettler Forlines homes we saw.”

Megan was crystal clear on what she wanted. Her biggest priority was incorporating a remodeling project that didn’t look like one. She wanted the change to work seamlessly with the current home’s design and flow.

The home they purchased was built nine years earlier, by another company. The size was comparable to the home they had, but the basement makeover would add 1,200 square feet of living space. The home also came with a swimming pool, so enhancing the walk-out basement ensured a more appealing access point.

Going in, Megan knew what she wanted. “Dan Fraker (Kettler Forlines Homes’ estimator) listened. I told him, ‘Here’s what I don’t like and what I want to do.’ We were down there with a measuring tape and painter’s tape marking the floor. I already had a fit and finish in mind.”

Here are some of the things on their basement makeover wish list and how it turned out:

“This was what I was looking for and what made it worth it to me,” explains a very contented Megan, who decorated with a palette of coastal cool colors to pull it all together. “I definitely learned things as I went, like electrical panels and HVAC. But we had full confidence in our project manager, Craig Smith. He was texting and keeping in touch, and was always right there when needed.”

From start to finish, the entire basement renovation took four months, with only minor delays from the pandemic. Knowing what she wanted and working with a skilled, attentive team kept the project on track and without any of the unwelcome surprises that some homeowners experience.

Have you made up your mind yet? Kettler Forlines Homes welcomes the chance to discuss your remodeling ideas. Leverage our 42+ years of homebuilding experience to reimagine and recreate your home. Get started by reaching out to us and let’s give your home the same exceptional results that Greg and Megan are now enjoying. 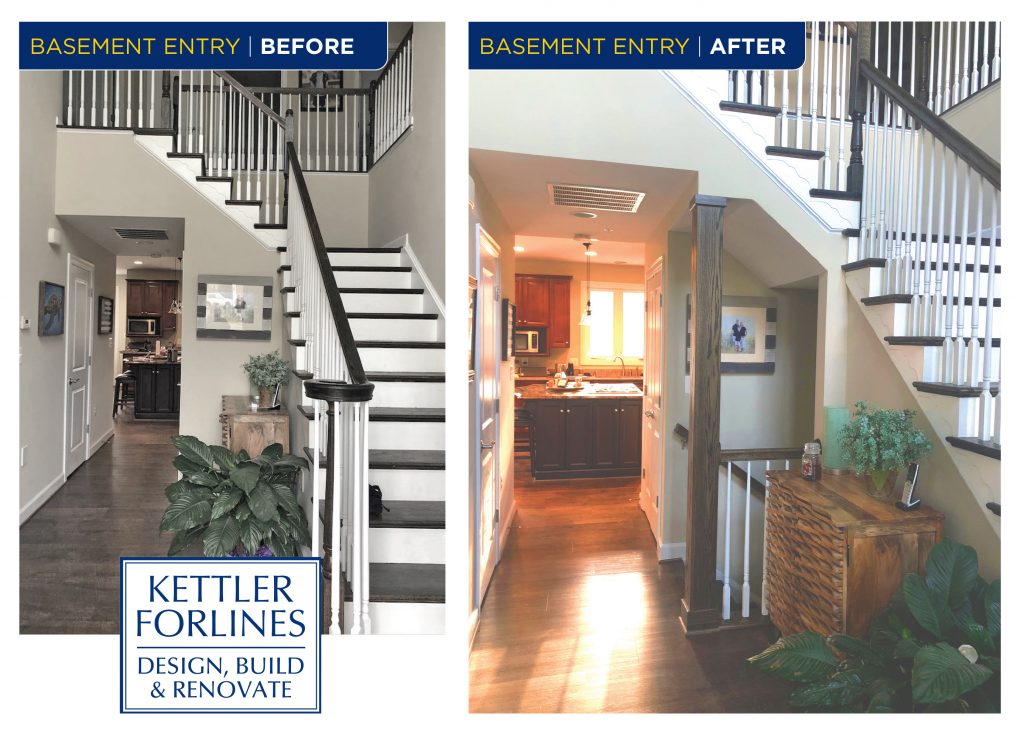